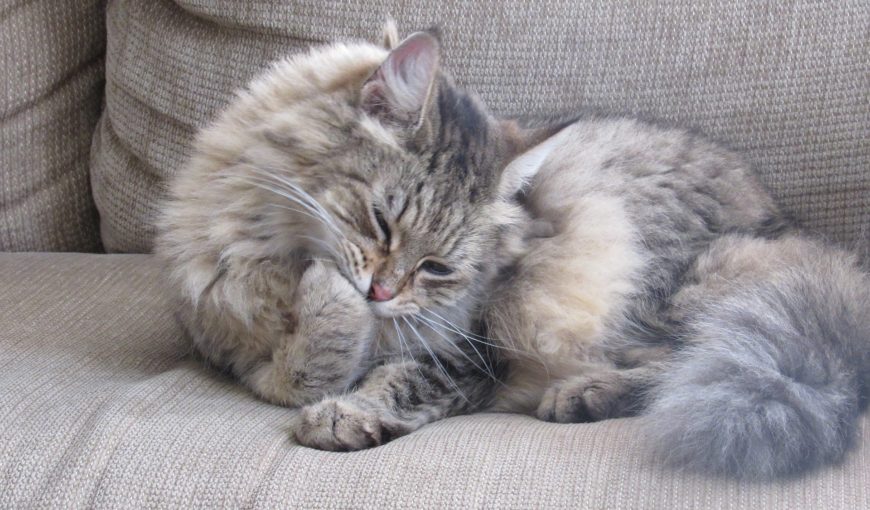 Cats are known for vomiting hairballs, which is more common in long-haired breeds of cat, and tend to be the same color as the cat’s fur.

Known medically as a trichobezoar, hairballs are seldom round.  As the hair passes from the stomach through the esophagus, the hair takes on a sausage shape.  Many people mistake a hairball for stool the first time they see one.

Hairballs are a byproduct of the hair swallowed by a cat when it grooms itself.  Cats who are more frequent groomers tend to develop more hairballs.  It is common to see an increase in the frequency of hairballs in the spring shedding season when a cat would be ingesting more of the loose haircoat.

Most hair that a car swallows passes through the intestinal tract, or it forms a hairball that is harmlessly vomited.  However, it is possible for the mass of hair to grow large enough that it is impossible to pass from the stomach and cause a blockage.

Symptoms of a blockage include, lack of energy, lack of appetite, and episodes of unproductive vomiting.  Cats need to eat daily, or they are at risk of a dangerous liver condition, so if your cat stops eating, don’t wait to see if they bring up a hairball—bring them in as soon as possible for an evaluation. Contrary to popular belief, cats do not “cough up” hairballs, and if your cat is coughing, it should be seen for an exam.  If the hairball is large enough to cause an intestinal blockage, there can be serious damage to the intestines.  Surgery is usually required to remove an intestinal blockage.

Prevention is best when it comes to hairballs.  You can help your cat by removing as much dead hair from your cat’s coat with daily brushing and combing, especially for long haired breeds.  If your cat won’t allow you to brush it, you may wish to have the cat clipped every year to six months to reduce the amount of hair it swallows.  There are hairball remedies available over the counter and as a prescription, but you should bring your cat in for an exam before using a hairball remedy or laxative.  The symptoms of hairballs are similar to other conditions that need prompt treatment, so more serious problems should be ruled out before beginning hairball medications.

It is also best that floors be kept clear of items such as threads, bits of string, bread ties paper clips and small wires.  These can be swallowed and mix with the hair, making it impossible to pass.

If your cat suffers from frequent hairballs, or has symptoms of hairballs but doesn’t pass hair, contact the hospital and set up an appointment so we can help your pet.