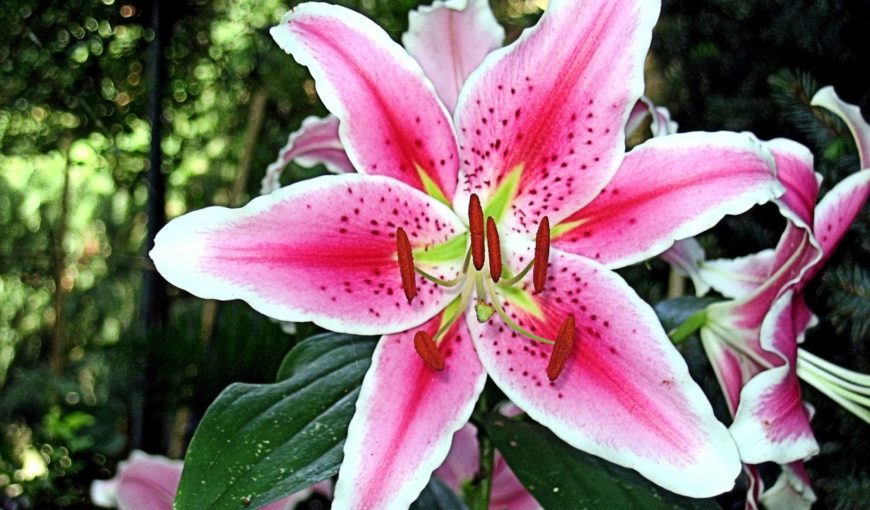 As Easter approaches it is time to worry about cats and Lilies.  After the long Western New York winter, we look forward to flowers bright flowering bulbs are popular gifts. Every store and nursery bursts with the colorful blooms.

When discussing lily poisoning, most people think of white Easter lilies, but modern horticulture has produced lilies and lily hybrids in many colors, and they come with fancy names that don’t always include the word “lily”.

Lilies are so toxic to cats that they can become critically ill from drinking the water from cut flowers containing lily stems, or even licking pollen from their feet or fur.  Lilies often drop large amounts of pollen onto surfaces, which a cat may walk through, and then ingest it during grooming.

Cut flower bouquets can be a problem all year, not just at Easter, as the flowers are seldom named or listed anywhere in the bouquet.  Stargazer lilies are very common in cut flower arrangements, and the blooms come in many colors other than white.

Many flowers that grow from bulbs, such as Daffodils, tulips and amaryllis can also make pets very sick if consumed.

If you know your cat has come into contact with, or eaten a lily, seek medical attention IMMEDIATELY!  Call us at 824-4108, or seek help at a 24 hour emergency facility after hours or on the weekend. There is a limited window of approximately 18 hours after ingestion for treatment to be successful.

If you are uncertain what type of flower or plant your pet may have eaten, it is best to seek help anyway.  Because of the short treatment window, it is best to be safe. Whenever possible, bring the plant with you to the hospital.  A call to the animal poison control service may be required to help identify the plant and ensure proper treatment.

Some of the signs of lily poisoning in cats include: lack of appetite, lethargy, hiding, vomiting, diarrhea, bad breath, dehydration, seizures, increased thirst, increased urination, inappropriate urination, irritation and swelling of mouth tissue, drooling, foaming at the mouth and pawing at the mouth.  Not every pet exhibits all symptoms.

Treatment includes inducing vomiting before symptoms appear to remove the toxic matter and prevent further absorption.  IV fluid therapy is started as soon as possible to prevent the dehydration that concentrates the lily toxin in the body and dilutes the toxin in the kidneys.  Several blood tests will need to be performed in succession to monitor kidney function.

Decontamination must begin as soon as possible in the early toxic stages.  The vomiting that is a symptom caused by ingesting the lily comes too late to be of any benefit.

The best way to protect cats from lily toxicity is to not allow lilies into the home in the first place.  If you are unsure the flowers in question are lilies, err on the side of extreme caution and keep them strictly away from cats.  Allow NO access.