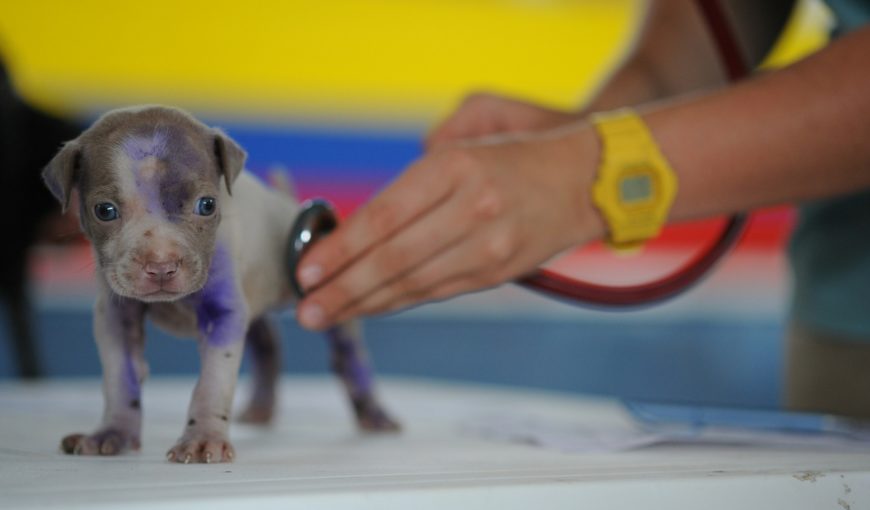 The Canine Distemper vaccine, which is abbreviated to DA2PP, protects against four deadly diseases, only one of which is called “distemper”.  The “D” in DA2PP stands for Distemper.

Canine Distemper has NOTHING at all to do with a dog’s behavior or temperament.  Getting the vaccine will not keep a dog calm or stop it from biting.  The confusion comes from the origins of the word and the notions people had about what caused diseases many hundreds of years ago.

Our word “Distemper” comes from the Latin word distemperere which means “not to mix properly”.  In the Middle Ages people believed that mysterious fluids called “humors” needed to be balanced in the body, and that if those “humors” were not properly mixed, disease would result.

We now know that viruses and bacteria cause disease, but the names of those diseases have not changed from olden times.

The first vaccine against distemper was developed in 1923 but was not commercially available to veterinarians until the 1950’s, when it became common for people to vaccinate their dogs against this deadly illness.

Distemper spreads through aerosol droplets, infected bodily fluids such as nasal and eye discharges, feces and urine.  The time from infection until when symptoms first appear is 14-18 days, although a high fever may be present as soon as 6 days after infection.

The virus affects the lymphoid tissues first, and then affects the respiratory and gastrointestinal systems, and then infects the central nervous system.  Complications such as pneumonia and encephalitis are very common.

The symptoms of distemper are fever, loss of appetite, discharge from both nose and eyes, vomiting, diarrhea and dehydration.  Once the central nervous system becomes involved, the dog will develop twitches, characteristic seizures called “chewing gum fits” which worsen to grand mal convulsions, blindness, paralysis and incontinence.

Dogs that survive distemper suffer a progressive deterioration of mental abilities and motor skills and face extreme pain and suffering unless humanely euthanized.

Without completing the full series of distemper vaccinations, the vaccine will not prevent or lessen the severity of infection.  Dog owners who do not finish the full series not only have their own dog at risk, but unvaccinated dogs are a reservoir for other animals to contract distemper before they are fully vaccinated.  Wild dogs such as coyotes and wolves can also catch and transmit distemper, as can members of the weasel family and raccoons.

Distemper is very common in areas where there are stray dogs, and in animal shelters that handle large numbers of unvaccinated animals.

Canine Infectious Hepatitis is an acute liver infection cause by Canine Adenovirus Type 1, (CAV1) and the virus affects wolves, coyotes, bears, and foxes.  It is spread by the feces, urine, blood, and saliva of affected animals.

Symptoms include: corneal swelling, Fever, loss of appetite, jaundice, and liver failure.  Severe cases develop bleeding disorders and even hematomas in the mouth.  Dogs can recover, but corneal edema (swelling) and kidney issues may persist.  There is no cure–only symptomatic and supportive treatment.

Parainfluenza is a highly contagious respiratory virus that causes tracheobronchitis.  This virus spreads rapidly through kennels. It is spread by contact with the nasal secretions of infected dogs, especially airborne particles and droplets.

The symptoms of Parainfluenza include a dry or a wet cough, low-grade fever, nasal discharge, lethargy and loss of appetite.  A dog can still contract Parainfluenza even after vaccination, but the symptoms are usually mild, and a vaccinated dog can become ill if exposed to a mutated strain.

Canine Parainfluenza is the first “P” in DA2PP, and it is NOT related to Canine Influenza

The final “P” in DA2PP stands for Canine Parvovirus which is an acute, highly contagious disease of dogs that was first described in the early 1970s. The virus attacks rapidly reproducing cells, such as those lining the gastrointestinal tract.

The virus is shed in large amounts in the stools of acutely infected dogs for up to several weeks following infection and is transmitted by oral contact with infected feces. Parvo can be carried on the dog’s hair and feet, as well as on items such as contaminated crates, shoes, and other objects. When a dog licks anything that has been contaminated with Parvovirus, it contracts the disease.

Parvo affects dogs of all ages, but most cases occur in puppies 6 to 20 weeks of age. Doberman Pinschers, Pit Bulls, Rottweilers, and mixes of these breeds appear to acquire the infection more readily and experience more severe symptoms. The reason for lower resistance in these breeds is unknown.

Following an incubation period that averages four to five days, the acute illness begins with depression, vomiting, and diarrhea. Some dogs can have high fever.  Pups with severe abdominal pain exhibit a tucked-up abdomen. Diarrhea is profuse and contains mucus and/or blood. Dehydration develops rapidly.

Heart muscle involvement can happen in young puppies can be common, especially in shelter environments where the mother dogs are unvaccinated.

Treatment for dogs with this disease requires intensive veterinary management. Hospitalization is essential to correct dehydration and electrolyte imbalances. Intravenous fluids and medications to control vomiting and diarrhea are required. More severe cases may require blood plasma transfusions and other intensive care.  Antibiotics are prescribed to prevent septicemia and other bacterial complications, which are the usual cause of death.

The outcome depends upon the virulence of the specific strain of parvovirus, the age and immune status of the dog, and how quickly the treatment is started

Vaccination starting by 8 weeks of age, will prevent most (but not all) cases of parvovirus infection. During the first weeks of life, puppies are protected by high levels of maternal antibodies. As these levels decline, there is a period lasting from two to four weeks during which puppies are susceptible to infection because vaccinations have not yet fully taken effect. This susceptible period varies from pup to pup, which is why pups anywhere between 6 and 20 weeks age can contract parvo.

Vaccination provides excellent protection from extremely serious diseases.  If you have any questions about vaccinating your dog, or if your dog needs booster vaccination to keep immunizations current, please call 824-4108 to set up an appointment.